The Joy and Majesty That Were 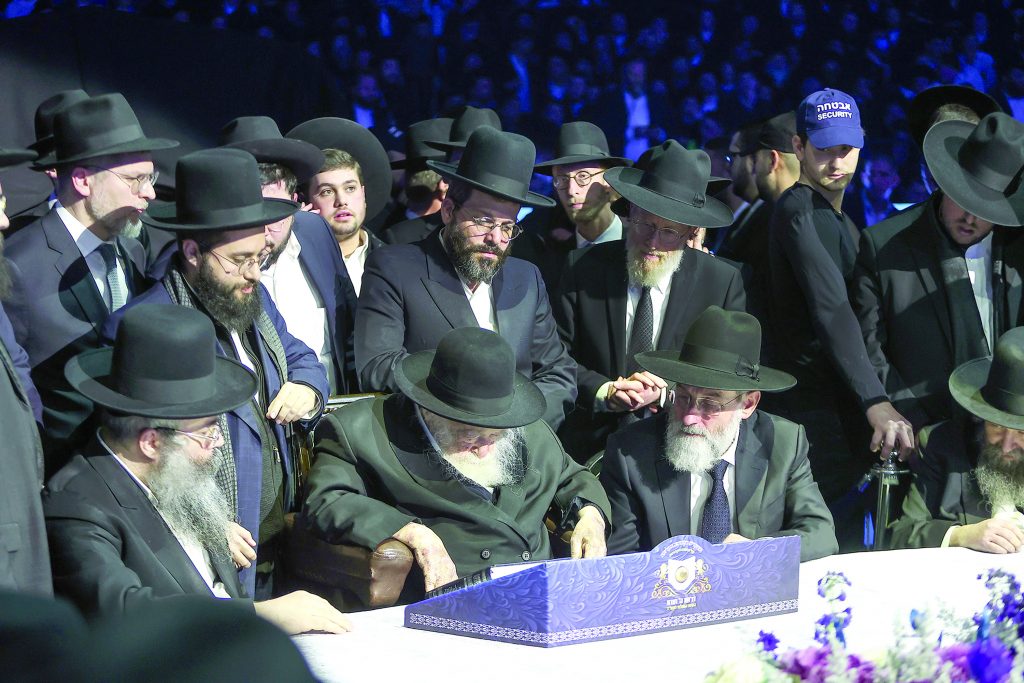 Rav Chaim had been involved with Dirshu for many years. The Sar HaTorah attended quite a few of the large Dirshu gatherings like the Siyumei Hashas in 2012 and 2020 for example, where he even recited the kaddish.

But the relationship was much closer than that since there were many private Dirshu gatherings at Rav Chaim’s home – especially when they celebrated different milestones with Daf HaYomi B’Halacha, where he spoke to the charter members of the organization, gave them chizuk and expressed in the clearest way how much he loved what Dirshu was doing for Klal Yisrael – and how he was even jealous of what Dirshu was attaining. 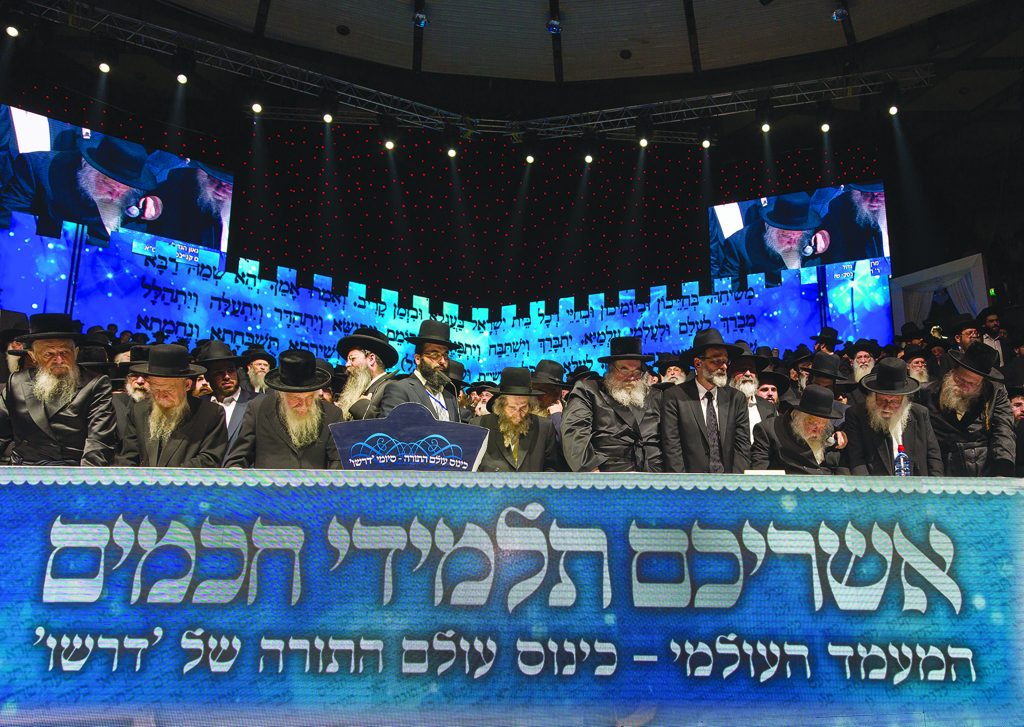 As someone who has had the good fortune to be involved with the Dirshu organization under the leadership and guidance of Rav Dovid Hofstedter shlita, I have found myself attending and writing about numerous Dirshu events through the years. There have been many times when I was touched by things that were said by various speakers, songs that were sung, and sights that I witnessed. I have seen thousands of Yidden singing together in gigantic halls, and I have walked along the rain soaked ground just outside the Chofetz Chaim’s kever, with a much smaller group of gedolim. Like I said, many of my interactions with Dirshu have been memorable and have stuck with me. But a key moment happened at the Dirshu Siyum on Mishnah Berurah, which took place at the Arena Stadium in Yerushalayim in 2022.

It was a memorable event for a number of reasons.

But this time it was memorable for something that happened and made a deep impression on me. Sitting not far from the head table, I caught sight of a tent that had been erected near one of the exits of the hall and was waiting there patiently. I knew what that tent meant. It meant that there was a good chance that Rav Chaim Kanievsky was going to be attending this event and would be brought over to the head table within the safety of that tent. Being that Rav Chaim was already very elderly (this event would end up being his final public appearance) it was unclear until the last moment, whether he would actually attend. 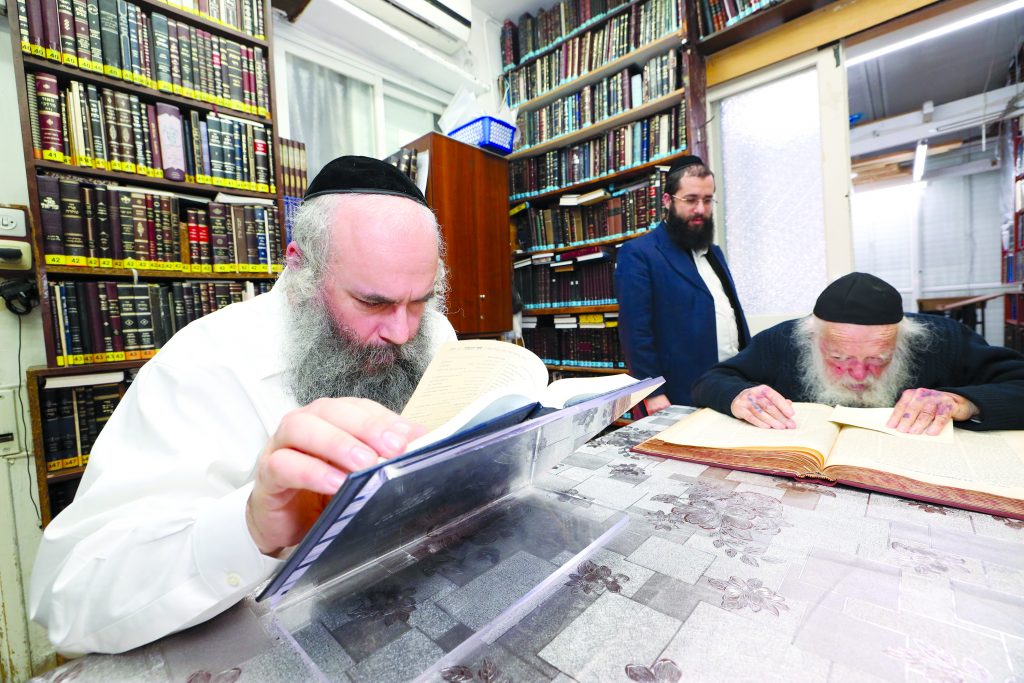 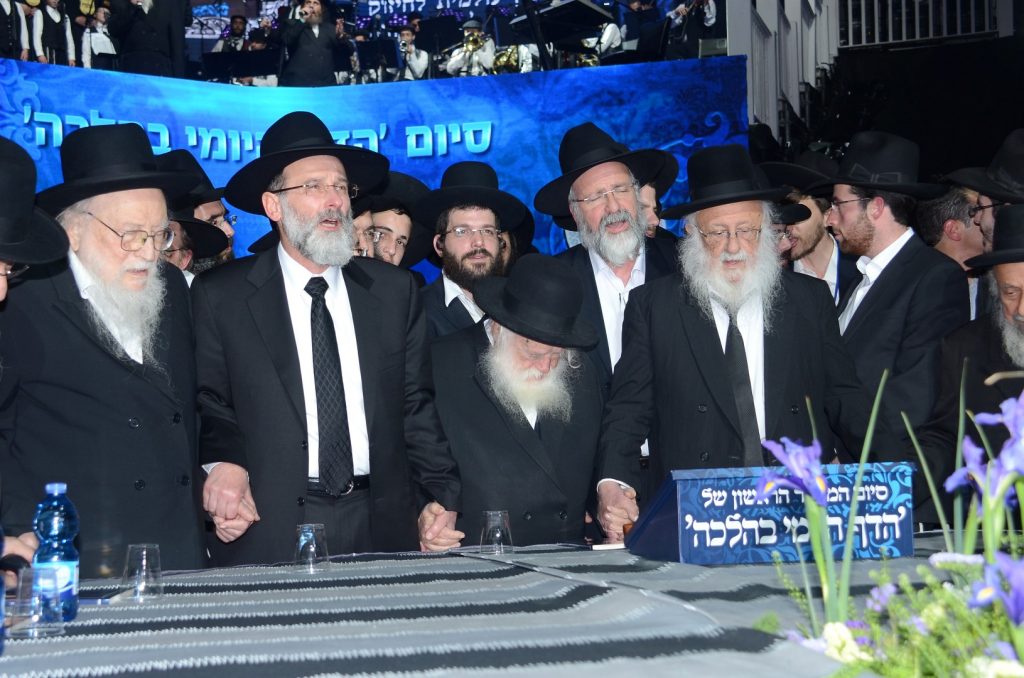 But then in the middle of the event, suddenly we understood that Rav Chaim had arrived and was being brought into the hall. The fact that he had chosen to make the incredible effort to come that night, makes sense, especially when you remember the quote that his talmid, Rav Mann, related from Rav Chaim with regard to Dirshu. Rav Mann said in Rav Chaim’s name, “Tell Dirshu that I am jealous of their zechusim. Ashreichem V’Ashrei Chelkechem – fortunate are you and fortunate is your lot!”

Since this is what Rav Chaim felt, it made sense that he was there on that great night.

I have never seen a crowd react the way that crowd reacted when Rav Chaim appeared at the head table. There was a sense that history was being made as the Gadol HaDor and Sar HaTorah was brought into the hall. Every person in that gigantic hall was on their feet, the music began to play and it was beautiful, but the singing from the mouths of every person in the hall was way more beautiful. A sense of electricity coursed through my body as I watched the events unfolding and saw the veneration and admiration – more than that – the absolute love – which all these beautiful Yidden felt for Rav Chaim. At that moment it seemed as if the very roof of the Arena was about to go flying off into the night, such was the level of excitement and enthusiasm. Like I stated earlier – I have been at numerous Dirshu events, but Rav Chaim’s entrance at that siyum was something I will never forget, for it taught me in the realest sense who Klal Yisrael values and what we all aspire to be. In my mind, it was an example of Kavod HaTorah at its finest.

Interestingly enough, the siyum turned out to be Rav Chaim’s final public appearance. Rav Chaim was very weak in the days and weeks prior to the event. Boruch Hashem at the last second he was able to make it, and he sat there at the head table, with a pamphlet containing a section of the Mishnah Berurah on his lap. For the most part Rav Chaim kept his eyes on the page in front of him. At the same time, during the moments when he sat there, those around him saw him do something which he had rarely done before and which was somewhat surprising. From time to time they saw him look up and focus on the crowd which filled the gigantic stadium. In the past, Rav Chaim never did this at any of the other Dirshu events. He never looked around him and he never really paid attention to the crowd. He was always focused on his learning and his machshavos. But on that night and during that final siyum, he did look around. Not once, but a number of times. And not only did he look at the direct view of whomever was sitting directly in front of him, he even moved his head so as to take in the panoramic view. 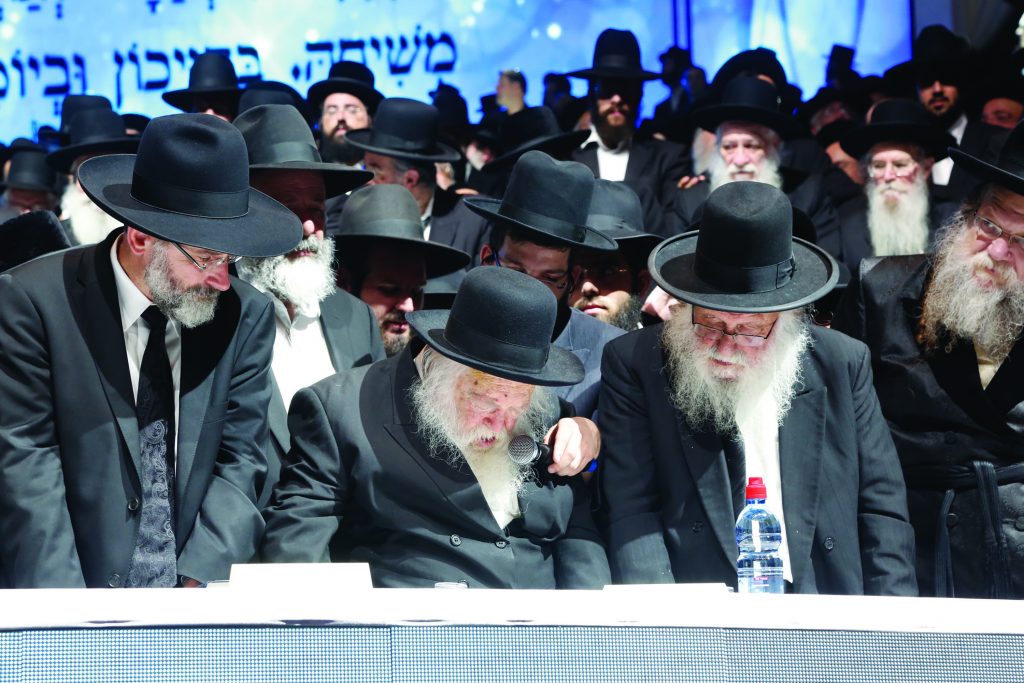 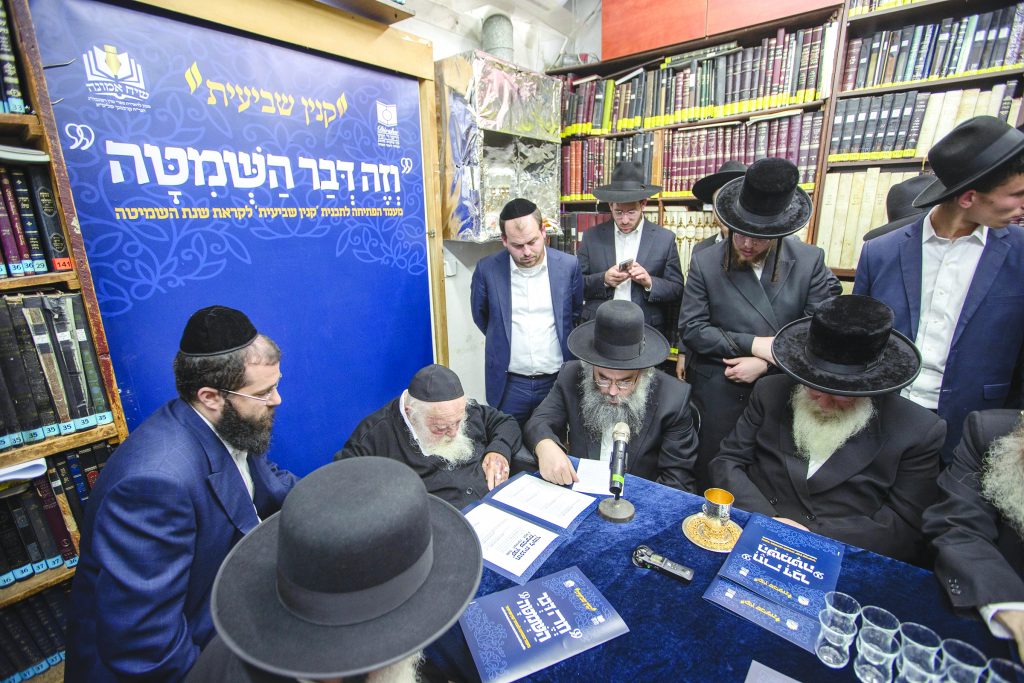 And because this was so unusual for Rav Chaim, it made a real impression. The fact that Dirshu was zocheh to host the Sar HaTorah at that event would end up meaning much, much more for everyone there within a very short time, since he passed away on Purim, so soon after the siyum.

During the shiva Rav Dovid went to be minachem ovel the family and while sitting with one of Rav Chaim’s sons, he mentioned that the Dirshu siyum was his last public appearance.

Rav Chaim’s son then made a fascinating observation.

“My father said goodbye to Klal Yisrael at the siyum.”

Those words struck a chord and resonated in the most authentic way, because that’s exactly what he was doing – looking at the crowd of Bnei Torah again and again – an action he had never done in the past. He was in the sefer and back to the crowd, back to the sefer and back to the crowd. At the time it had seemed to be out of character, but the moment Rav Chaim’s son made his comment, it was obvious that his words were emes, and that his father really had been saying farewell to the people that he loved so much, with a series of loving looks.

While Rav Chaim’s eyes had been closed a lot of the time in the last period of his life, at that moment they were completely open. One couldn’t help but feel that the neshomos of Klal Yisrael and their Gadol HaDor were completely intertwined, which was why the feeling of electricity that swept through the hall was so very powerful. It was stemming from the fact that both were saying goodbye to one another – the people who had waited for hours outside the famous address on Rashbam Street in the heart of Bnei Brak, and the elderly Rav Chaim, who had welcomed them into his home and life with such love – as he provided them with hope and blessing for so many decades.

That could explain why the singing was so strong and the feelings were so much more powerful then they normally were. Because even though none of the people there knew that it was the last time, their souls knew, and that knowledge transcended the physical world and took everyone in the hall to a different and higher place.

And so, while with certain tzadikim it’s about what they say to you and what you say to them, it was not that way with Rav Chaim Kanievsky. Here it was about Klal Yisrael’s neshomos connecting with his on a subconscious level and being able to receive hadracha from him, so many times, on that level.

And there is no question that everyone will remember the way it was and that the memory of that apartment and staircase and bridge near the Lederman shul will remain fresh in our minds. Most of all, we will recall the sight of an elderly Yid with a sefer in his hands and the entire Torah in his mind – who gave of himself completely to Hashem and at the same time made himself available to his people like a father to his sons.

For the fact is, Rav Chaim was ours and we were his.” 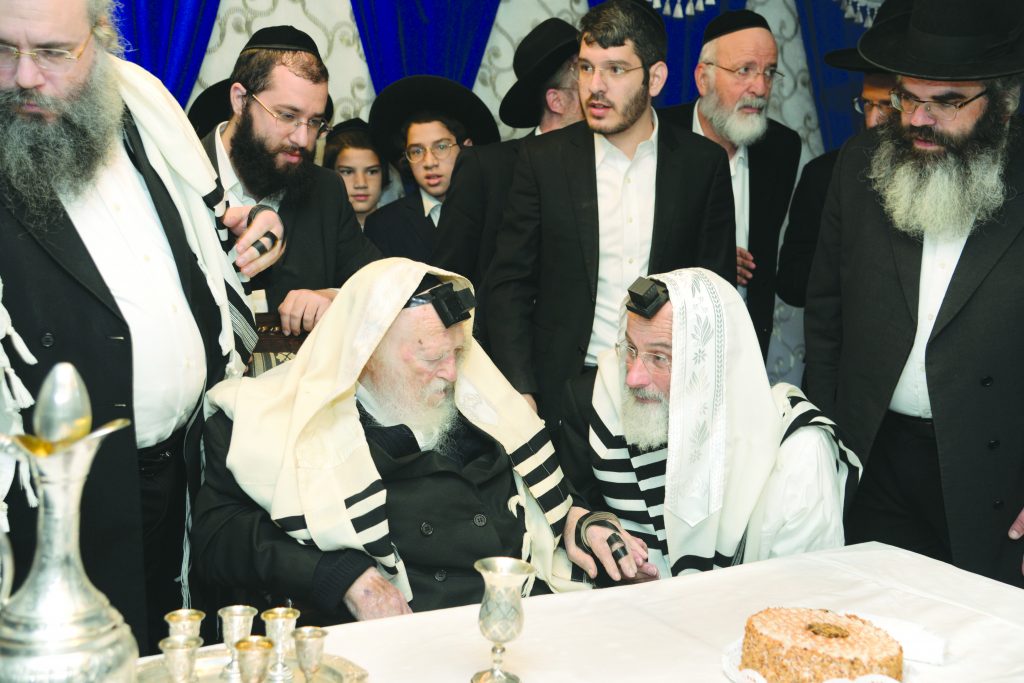 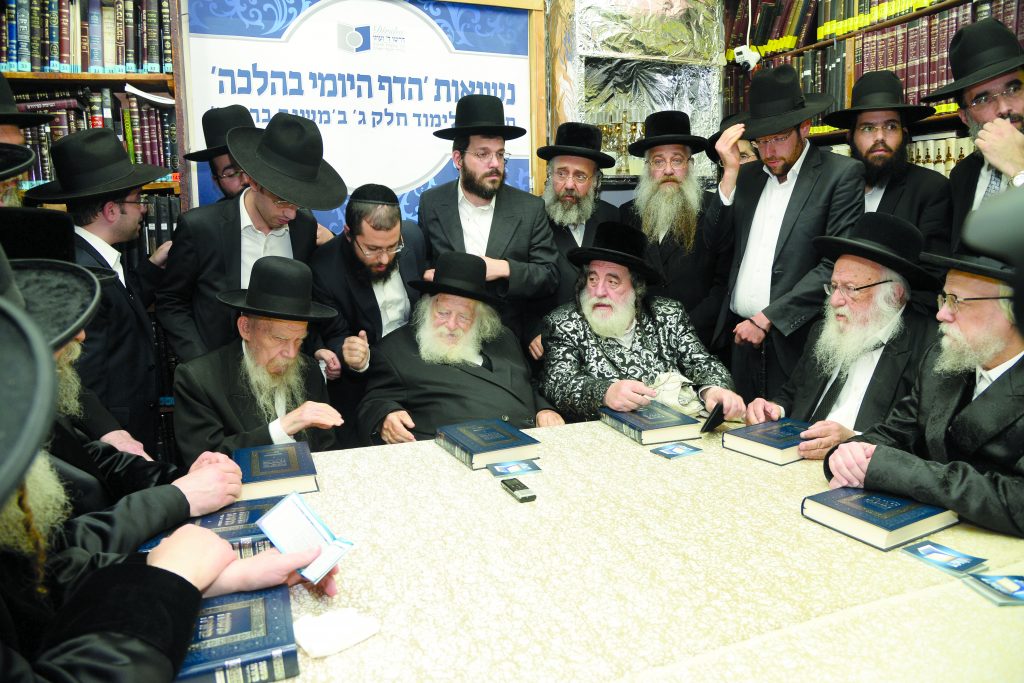