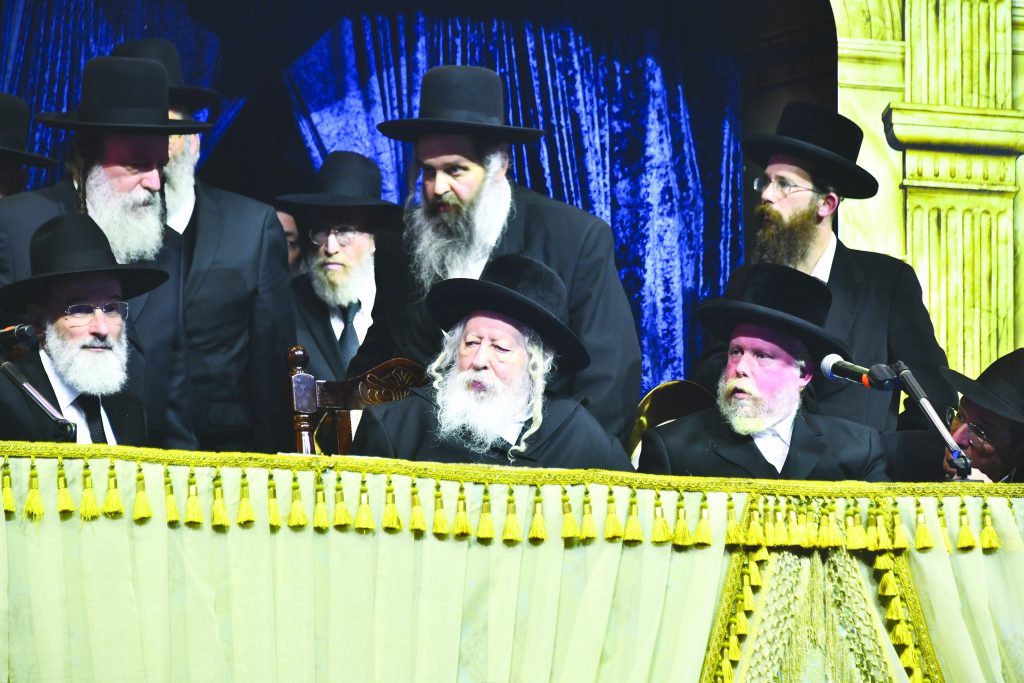 Rarely does one merit to see more than a hundred bachurim, yungeleit and even children under bar mitzvah publicly farhered on the entire Shas!

That is exactly what recently transpired at the massive Arana Stadium in Yerushalayim when 10,000 people came to watch an absolutely remarkable demonstration of kavod haTorah. The event was a mass, public farher – test of bachurim from the entire network of yeshivos of the Gerer chassdius. Many of these bachurim and avreichim have learned the entire Shas to the extent that they were prepared to be tested publicly, and not just before a small group, but in front of thousands of people led by the Gerer Rebbe, shlita.

It was an unbelievably remarkable sight! Difficult and complex questions were asked by the Rabbonim on all areas of Shas and hundreds of bachurim and yungeleit answered with lightening-speed quickness!

The large stage was graced by the Gerer Rebbe, the prominent Rabbonim and Roshei Yeshiva in the Gerer Chassidus and the guest Rabbonim who had been invited to test the talmidim.

It was clear that Rav Michel Zilber was deeply impressed with the knowledge of the talmidim. Throughout the test, he was conversing with the Gerer Rebbe clearly showing what an impact the wide-ranging knowledge of Shas of the young bachurim and yungeleit had on him.

Rav Shalom Cohen, too expressed his absolute amazement that young men should have such a comprehensive command of Shas at such a young age.

Another Torah figure who was asked to come and test the bachurim was Rav Dovid Hofstedter, the Nasi of the Dirshu organization. Rav Hofstedter, who established an organization to encourage wide-ranging knowledge of all Shas with accountability in learning through taking tests, clearly derived nachas from seeing the level of knowledge of the bachurim. He asked numerous comprehensive questions from many different areas of Shas. The questions were clearly designed to show whether the bachurim and yungeleit had a depth of understanding of the sugyos beyond the superficial. As Rav Hofstedter asked question after question, it was clear that he was highly impressed with the knowledge of the many young talmidei chachomim.

The comprehensive knowledge is a result of the learning and chazara system that has been instituted by the Gerer Rebbe. The system encourages bachurim to encapsulate the primary ideas contained in each blatt Gemara and to review it with one’s chavrusah until the knowledge is “mezumanim,” able to be accessed quickly and easily. Mezumanim means it is available to you with virtually instant recall.

In addition to the daily amount of required Gemara learning in the various programs in the Gerer Yeshiva system, constant chazara is built into the daily program, including both chazara on recently learned masechtos as well as chazara on masechtos learned in previous months and years. This enables the young men to constantly review the essence of each blatt Gemara and retain it.

Greatness in Torah is Achieved One Sustained Step After Another

After asking numerous questions and receiving answers to virtually every one of them, Rav Hofstedter related a dvar Torah whose message was, that greatness in Torah is not accomplished in one fell swoop and one shining moment. It is a result of constant learning and chazara, built step upon step, going from one level to the next, in a slow, methodical way. Greatness in Torah and in all aspects of avodas Hashem is achieved by climbing the mountain slowly, one step at a time, one step after the other, until one reaches the peak.

“Ashreichem Gerer Chassidim that you are learning in such a way! Aschreichem that you are methodically scaling the mountain of Shas until you know it and can be tested on it!”

Knowledge Of Shas, Gemara, Rashi And Tosafos Was As Familiar As The Knowledge Of Aleph Bais!

Then Rav Hofstedter shared a personal story. “Many years ago on Sukkos, the great Gadol Hador, the Rosh Yeshiva of Mesivta Torah Vodaas, Rav Avrohom Pam, zt”l, was visiting in Toronto and he came to visit my father, z”l, who passed away earlier this year and, ybl”ch, my father-in-law, Reb Avrohom Bleeman, to discuss a matter of tzorchei tzibbur. I remember how the venerated Rosh Yeshiva was accompanied by his son, Rav Dovid Pam, who is a prominent Rav in Toronto. During the conversation, the Rosh Yeshiva, Rav Pam said something that made a great impression on me. The Rosh Yeshiva said that he had the zechus to have had Rabbeim for whom knowledge of Shas, Gemara, Rashi and Tosafos was as familiar as the knowledge of aleph bais!

“The message was clear. The message was that, on its most basic level, in order to achieve greatness a person has to learn Shas and review it over and over and over again until that basic knowledge is so clear that it becomes like aleph bais”. One then uses that knowledge as a springboard to delve deeper into the amkus of Torah.

Rav Hofstedter continued by saying, “The recent passing of the Sar HaTorah, Rav Chaim Kanievsky and the void of Torah that has been created with his passing, is still with us. That said, however, we must analyze Rav Chaim’s life and see how he reached such an exalted level of Torah knowledge to the extent that kol haTorah kulo was open to him with instant recall. The answer?” exclaimed Rav Hofstedter, “the answer is that he learned one daf after another daf and one masechta after another. His profound hasmada and his constant chazara enabled him to go from one level to another, slowly but surely, until he became the Sar HaTorah.

“With his passing there is a great void! It is a Torah void that we must fill by dedicating ourselves to learning and retaining increasingly more Torah knowledge.”

Rav Hofstedter concluded by praising the talmidei chachomim who are doing just that, who are learning and learning masechta after masechta and constantly reviewing so that they retain their knowledge to such an extent that they were able to be tested on the entire Shas! 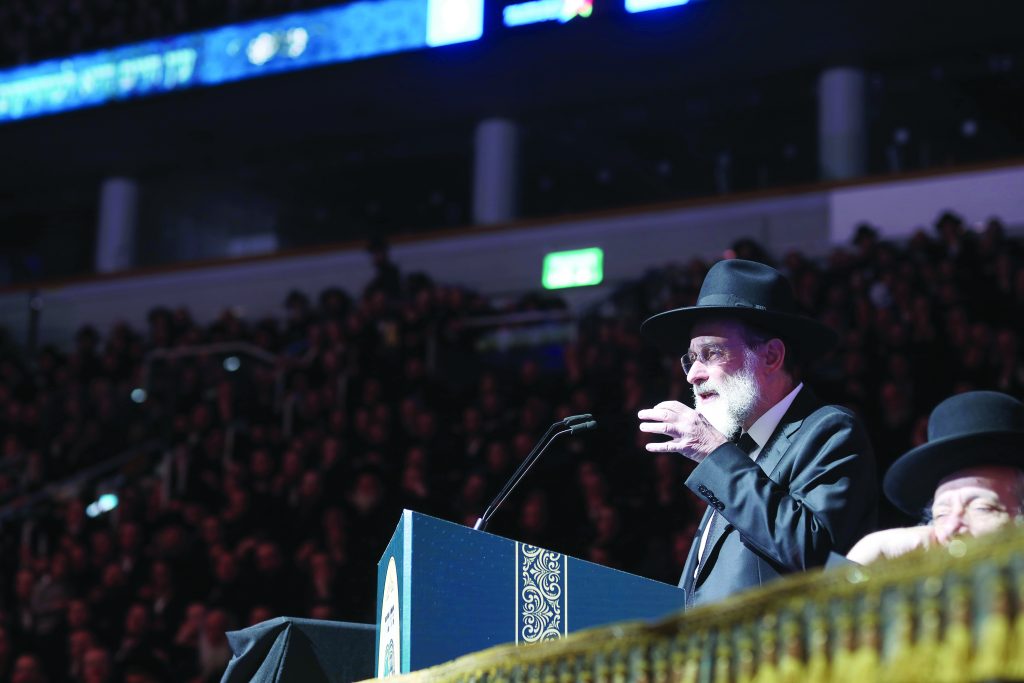