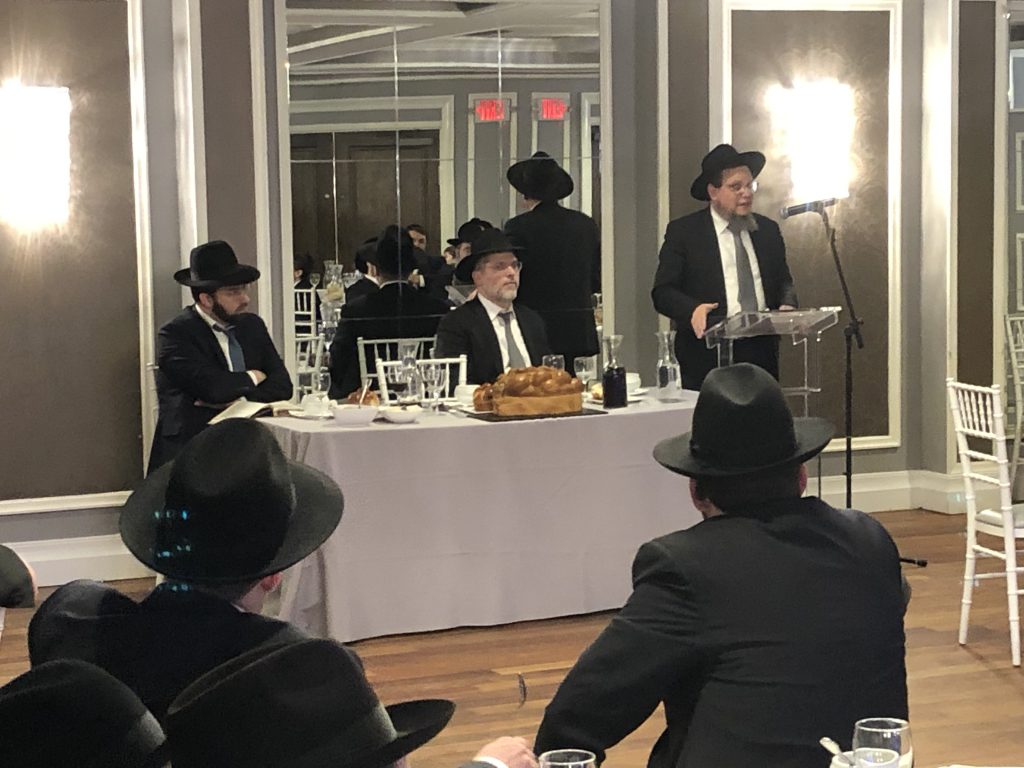 “Masechta Yevamos with bi-weekly tests in a night kollel?” That was the puzzled comment from a visitor to a remarkable siyum held at the beginning of this month on Masechta Yevamos. Kollel Ohel Daniel, led by Rav Ari Seidenfeld, is in fact a unique night kollel, where the members learn, chazer and finish long and difficult masechtos in a way that seems remarkable for a night kollel. In truth, however, it is not just a night kollel, it is a chevra, a close-knit chaburah of lomdei Torah and ovdei Hashem who, in an atmosphere of great camaraderie, are dedicated to shteiging. The Kollel has been in operation for the past thirteen years and they have learned fourteen masechtos, not only the “easy” masechtos that some relegate to night seder but also masechtos like Yevamos, Zevachim, Menachos, Nazir and almost all of the rest of Seder Kodshim.

Last week, at the Estreia Hall in Lakewood, the members of the kollel, their wives and their children gathered for a gala siyum on Masechta Yevamos. It was a masechta that was learned with great mesiras nefesh as the first months of learning the masechta were done during covid, when the chavrusos learned and chazered together on the phone.

At the siyum, the guest speaker was Rav Shlomo Cynamon, shlita, Rav of Kollel Dirshu of Flatbush. Rav Cynamon related that right when he walked into the hall, he could sense an atmosphere, a ruach of aliyah that was l’maalah, l’maalah!

Indeed, the two spirited dances held during the siyum made it clear that this wasn’t just any siyum. This was a siyum made by a group that learned with a true kesher nafshi with Torah and with each of the chavrei hakollel.

“Just watching the palpable simcha of the chaburah,” remarked one of wives of the chavrei kollel, “made me realize that there is nothing else in the world that can bring simcha like this!”

What is the secret of the simcha?

Rabbi Eliezer Zellinger a longtime member of the kollel commented that one of the secrets of the simcha is the tremendous sipuk hanefesh afforded by the schedule.

“The kollel,” Rabbi Zellinger explained, “meets five nights a week. On Sunday, Monday, Tuesday and Wednesday, they learn one amud and review the previous night’s amud. In addition, Thursday night is devoted to reviewing everything done that week and the previous week, four blatt in total. Thus, each amud is learned a minimum of four times. The tests every two weeks enable each person to learn and chazer with a true goal in mind. The chaburah is comprised of kollel yungeleit, rabbeim in yeshivos and baalei battim who all fuse together k’ish echad b’lev echad.”

In his remarks, Rav Ari Seidenfeld gave special credit to the nashim tzidkoniyos, the wives of the kollel members who forgo their husbands’ presence at home at the often-difficult time of bedtime and homework. “They are truly the backbone of the kollel’s hatzlacha,” he said.

“I can’t describe what sipuk, what spiritual satisfaction learning in the kollel affords me,” said one baal habayis who learns in the kollel. “The kollel is my anchor. Every night, no matter what went on in my day, I know I will learn and chazer one blatt at the very minimum. Any time I have a few extra minutes, I chazer to prepare for the test.”

Indeed, the mesayem at the siyum, Rabbi Eli Dickstein, remarked, “The hakoras hatov that I and all of my chaveirim have to one another and especially to the Rosh Kollel, is endless.

This coming summer zeman, the kollel will begin Masechta Horiyos and there are a few coveted spots available. To join please call 732-534-2800.