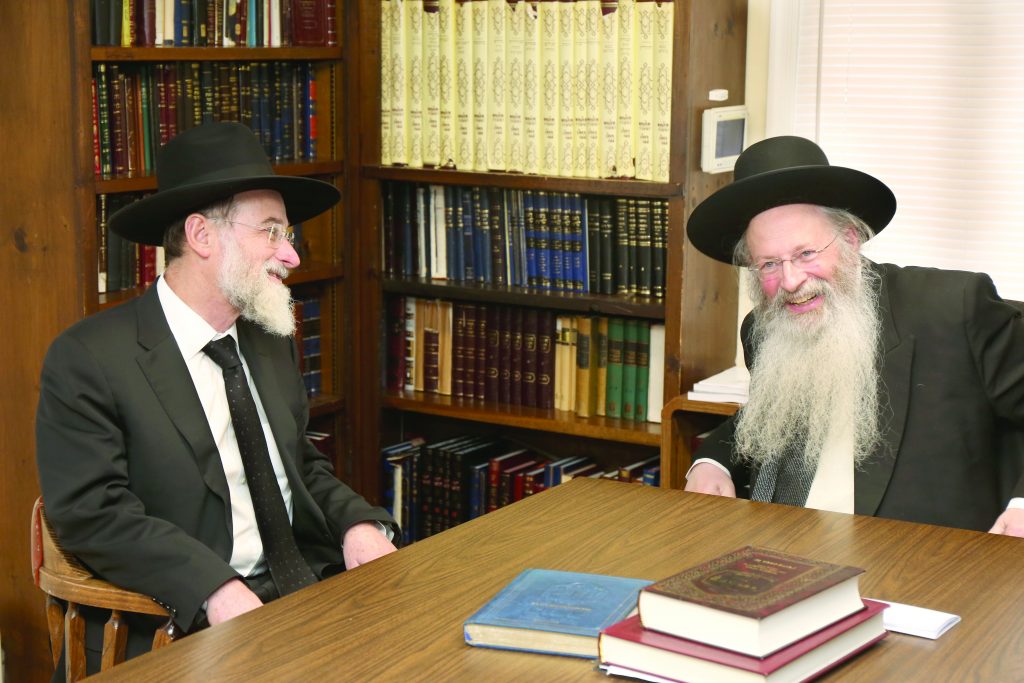 “Dirshu is always going mei’chayil el chayil. That is why Dirshu is so chaviv!” Those were the profound words of HaGaon HaRav Yeruchem Olshin, shlita, when he spoke with Rav Dovid Hofstedter and other members of Dirshu’s hanhalah and heard about Dirshu’s newest program, the Chaburas HaShas program that is garnering a tremendous amount of attention in the olam hayeshivos and beyond.

The new, unique program has brought Dirshu into an area of operation that has filled many bnei Torah and talmidei chachomim with a sense of great anticipation. That area is the area of iyun. Dirshu’s Chaburas Hashas program is the first large scale Dirshu Gemara program designed as a more in-depth learning program that will feature iyun kal, whereby lomdim in the program will be able to learn a certain amount of Gemara, Rashi and Tosafos every month as well as the limud of mareh mekomos that highlight the main Rishonim and Acharonim on the sugya. Of course, all of those will feature Dirshu’s trademark accountability in learning with monthly tests on the material learned.

Recently, Rav Dovid Hofstedter, Nasi of Dirshu, visited several Gedolei Yisrael both here in America and in Eretz Yisrael where he received guidance and a tremendous amount of support for the new program; a program that has the potential to have a colossal impact on the Torah landscape around the world.

When Rav Yeruchem Olshin learned about the program, he was particularly pleased and cited the fascinating words of Chazal that state that Moshe Rabbeinu was more chaviv, was dearer to Hashem than Noach. He said that the meforshim have many approaches to explain the essence of what Chazal is saying but on a simple level we can say that Moshe Rabbeinu kept growing and growing and growing. He never rested on his laurels. No matter how much he had accomplished he was always going higher and seeking greater closeness to Hashem. Noach however, plateaued. He reached an exalted level but did not seek to go higher.

“Dirshu is so chaviv, Rav Olshin said, “because it never rests on its laurels.” Indeed, Dirshu never decides that it is thrilled with its many tremendous accomplishments on behalf of Klal Yisrael and on behalf of Torah and it should bask in the glory and glow of its considerable accomplishments thus far. No! Dirshu is always going mei’chayil el chayil, trying to do more, trying to enrich Klal Yisrael with another program, another way to enhance limud haTorah… “That is why they are so chaviv!”

The new Chaburas HaShas program will feature the learning of two and a half blatt a week, (an amud per week day) with Friday and Shabbos consecrated for chazarah. There will be two tracks. Track one is Gemara, Rashi and Tosafos with a thirty-question test every month. Track two will feature Gemara, Rashi, Tosafos, and a list of maarei mekomos from the Rishonim and Acharonim prepared under the guidance of HaGaon HaRav Dovid Cohen, shlita, Rosh Yeshivas Chevron.

Dirshu Chaburas HaShas iyun program is making waves throughout the world. The program, the first of its kind, has taken the olam haTorah by storm because it offers a framework to learn one masechta after another for people who want to learn the Gemara in a deeper, more comprehensive manner than achieved through the framework of the Daf HaYomi. The program enables one to learn Shas with Tosafos and the main Rishonim and Acharonim. One maggid shiur related, “For years I have wondered when I would be able to complete Shas. Daf HaYomi is not practical for me. Now, however, with Dirshu’s new Chaburas HaShas program I can learn two and a half blatt a week, which equals ten blatt per month of Gemara, Rashi, Tosafos, and the main Rishonim and Acharonim on the sugya. In this way, I can complete the entire Shas with this type of ‘iyun kal,’ in less than two decades. It is such an opportunity! Such a windfall!”

Born at the Dirshu Convention

At the Dirshu convention held last month in Stamford, Connecticut the highlight of the Melave Malka Siyum on Seder Moed was the announcement by Rav Dovid Hofstedter about a new Dirshu program, “Dirshu Chaburas HaShas.”

At the Convention, Rav Hofstedter said, “After much consultation with numerous Roshei Yeshiva and with the bracha of the Gedolei Hador, the consensus is that we need to start a new program, a program of limud haShas b’iyun. It has been our minhag to announce new Dirshu programs at the culminating melava malka of a unique Dirshu Shabbos. Tonight, we are, be’ezras Hashem launching the new Dirshu Chaburas HaShas Initiative!

Rav Malkiel Kotler: “It Is a Gevaldige Rayon”

All the Roshei Yeshiva with whom Dirshu consulted expressed their elation with the program because it is a program that caters to talmidei chachomim who seek to learn in a structured program while simultaneously learning with the depth and understanding to which they are accustomed.

When Rav Hofstedter and members of Dirshu’s hanhala went to visit HaGaon HaRav Aryeh Malkiel Kotler, shlita, he said, “It is a gevaldige rayon – a wonderful idea.” He added that every talmid chacham needs to learn with a degree of depth that is not necessarily afforded by the regular bekius programs. “A talmid chacham needs to know how to learn with iyun kal,” the Rosh Yeshiva said.

HaGaon HaRav Moshe Hillel Hirsch, shlita, Rosh Yeshiva of the Slabodka Yeshiva and one of the prime talmidim of HaGaon HaRav Aharon Kotler, zt”l, Rosh Yeshivas Lakewood, said, “I always tell my talmidim and yungeleit who come to me, that they must learn in a way that is fitting for them and their own individual needs. I think this program can bring tremendous to’eles to many, many avreichim.”

As HaGaon HaRav Dovid Cohen, shlita, Rosh Yeshivas Chevron said, “This program allows for the learning of both, in a way that is very fitting for so many lomdei Torah. Of course, during morning seder, lomdei Torah learn with great iyun and hear shiurim on what they learn. Because of that, however, they generally do not cover so much ground in the morning seder. A program like Chaburas HaShas can allow a person to cover ten blatt a month while at the same time absorb the ‘heart’ of the sugya rather than learn it in a superficial manner.”

Similarly, HaGaon HaRav Moshe Shmuel Shapira, zt”l would encourage bochurim and yungeleit that aside from the regular iyun seder in the Yeshiva, they should  also have a seder of learning iyun kal that covers areas which are not usually covered by the regular iyun sedarim in Yeshiva. One seder does not have to take away from the other, but rather the two sedarim should complement one another.

Hagaon HaRav Shlomo Feivel Schustal, shlita, echoed that call. When he heard the details of the program, he excitedly remarked, “A person must ‘steal time’ to try incorporating this limud into his learning schedule. The underlying rule is that if a person wants to find time, he can find time. I would greatly encourage people to join this new program.”

Rav Shlomo Feivel added, “If a person truly desires to enter this program, I am certain that the wives will give their full support to such an undertaking. The help and support of the wives is a critical component in ensuring that one is able to reach goals in limud haTorah.”

Dirshu already has a proven track record in teaching people how to properly utilize every minute of time. This new Chaburas HaShas program will certainly do that. 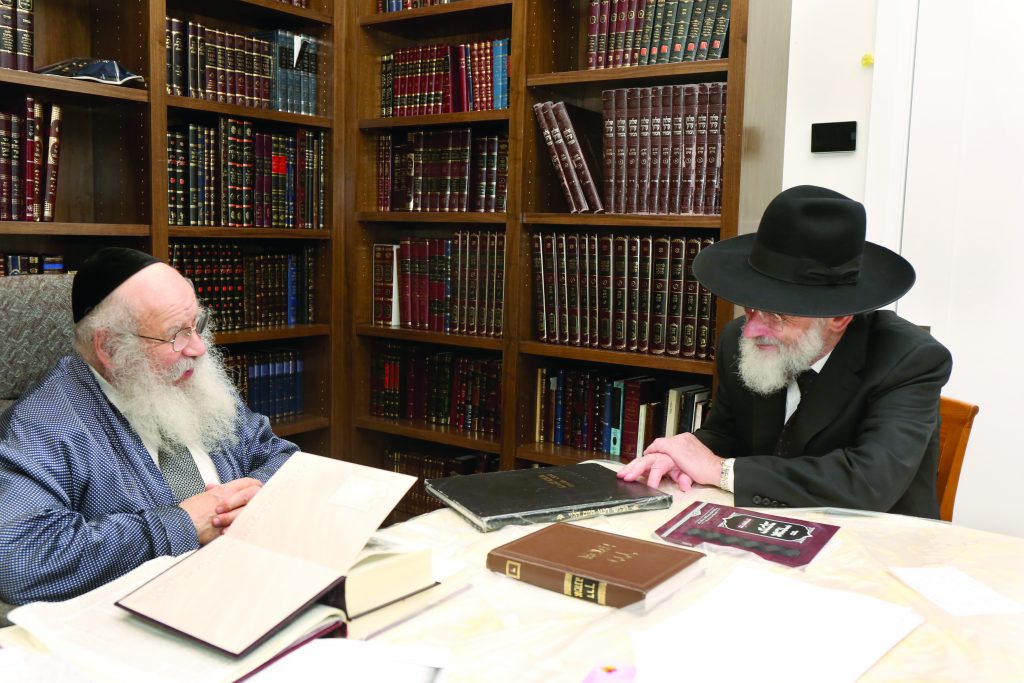